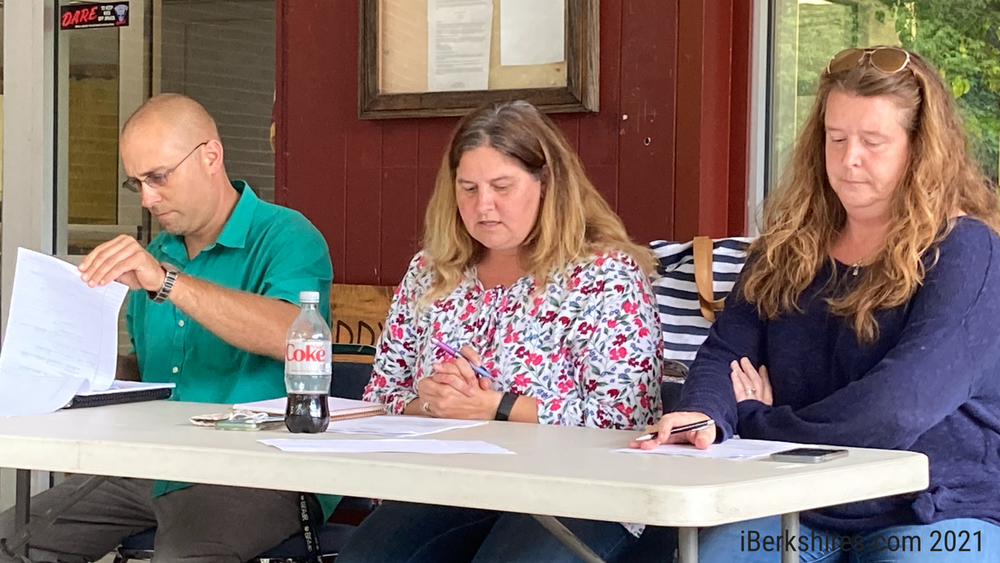 CLARKSBURG, Mass.  The School Committee on Thursday decided to ask the Select Board to hold a joint meeting to discuss recent turmoil at Town Hall, its impact on the elementary school and what is being done to bring stability back to town government.

North Berkshire School Union Superintendent John Franzoni gave the committee an update on the situation in light of recent revelations of problems maintaining the town's books.

"I'm an employee of Clarksburg, and I'm concerned about my position, to be truthful," Franzoni said. "It's definitely a tenuous situation, and it needs to be discussed more openly. We appreciate that they're trying, but we need more."

Franzoni said the people in town government who have had the most interaction with the district office the last couple of years have not been reachable over the last month.

"The more important person is the town administrator," Franzoni said. "That's the person in charge of the day-to-day duties in Town Hall. That person's not there and hasn't been there for over three weeks. What is the town going to do?"

Town Administrator Rebecca Stone was berated by the chair of the Select Board over inefficiency at Town Hall at an August meeting and left the room mid-meeting. That chair, Ronald Boucher, resigned from the board on Sept. 2. On Wednesday, the remaining two Select Board members held an executive session to discuss negotiations with the town administrator.

Meanwhile, the town has engaged an outside consultant to try to put the town's books in order.

"Adam Dupere said there can be a request for information from residents, the School Committee, the library, whoever," Franzoni said. "You can say, as town residents, we're requesting a meeting to discuss the situation."

School Committee Chair Laura Wood said she would reach out to Select Board Chair Danielle Luchi about arranging a meeting.

Residents speaking from the floor of Thursday's meeting and members of the School Committee agreed that such a meeting needs to be held in the evening to allow more participation from the community. The Select Board has held its last few meetings with posted times ranging from 9 a.m. to 10 a.m.

"I think there needs to be meetings at night that are being held in the morning all the time so that the town can go there and ask what's going on," Franzoni said. "They have consultants in there working, I think, up to three days a week. [The consultants] have said the problems were a lot bigger than they were led to believe, and they're worried about what the plan is going forward."

The problems are having a direct impact on the town's preK-through-8 school.

• Franzoni said he first became aware in late spring of this year that incorrect payroll deductions were being made from employees' paychecks. In July, he said, "One [employee] said, 'It's a joke. Every week, my paycheck is wrong,'" Franzoni said.

•  In early June, anyone with a life insurance policy through the town received a letter on a Friday afternoon saying their life insurance was being canceled because bills were not being paid.

•  Franzoni said the town appears to have no plan to close out the books on fiscal year 2021, which ended on June 30. The school needs that report in order to meet an Oct. 1 deadline to file its financial report with the Department of Elementary and Secondary Education.

• The school building itself needs renovations to make it compliant with the Americans with Disabilities Act and to remove asbestos and address its roof, Franzoni reminded the School Committee. "The town still didn't have a bond rating a year ago, and we're further away from that than ever."

• Franzoni said deficiencies with the Clarksburg building are one reason that talk of a merger with the Stamford, Vt., school district stalled, but Clarksburg cannot address the problems in the building if it can't borrow money for needed infrastructure fixes.

"This is really a concern about what's going to happen going into the future with all aspects of the town," Franzoni said. "It doesn't just impact the school. It impacts all residents here.

"I'm just worried about what's going to happen next with the town because [the Select Board doesn't] have a plan about who is in charge of the Town of Clarksburg."

"They need to get an interim person as soon as possible," Wood said.

"I feel like the message isn't reaching the town. The town should have a meeting like this for people to ask questions."

Residents at Thursday's meeting wondered aloud whether the town needs to be placed into receivership by the commonwealth, an idea that Franzoni did not dismiss out of hand.

"[NBSU Business Administrator Jennifer Macksey has shared with me that when she worked for North Adams 20 years ago, she was involved with an audit in Clarksburg where there was a reference to the state taking over, and she said the condition is worse now," Franzoni said. "You can't function without a town administrator."